Many of you reading this will have likely tried recording your own vocals. You’ll likely have a microphone like the Shure SM58 or Rode M1, or perhaps you have a more typical condenser microphone. Or maybe you’re just recording on your phone and listening back.

Either way, the usual first experience that people have when recording is “do I really sound like that?!”

The second set of experiences that people have (once they get over the first reaction) is typically along the lines of “hmmm, getting a good sound is harder than I thought“.

One of the things that’s odd about recording is that it is taking something that we typically hear naturally in the real world, and translating it to the artifical digital domain – i.e. the computer. Then when we listen back, we listen back via an artificial system of reproduction (speakers).

The way a microphone works is via a thin layer of material (called a diaphragm) that vibrates as it receives sound, and a secondary mechanism coupled therewith turns that diaphragm vibration into an electrical signal that exactly represents the soundwave as it was received at the diaphragm.

Your ear works in much the same way. Our eardrum is that thin layer of material that vibrates as it receives sound, and a secondary mechanism (cochlear) translates that into signals to go to the brain.

The thing that makes the human system different is that there is a brain directly involved to translate and make sense of the signals for us. Here’s how that matters

Why we don’t think we sound the way we do

Volume:
Try this experiment. Record someone (on your phone, for example) whispering, then speaking normally, then shouting. It is preferable it is someone else speaking so you can hear them as a bystander whilst the recording is occurring. In the room with them, you can hear there is a volume difference between that person whispering, speaking or shouting.

But when you press play on the recording, you will likely find that the volume difference seems far greater than you felt you heard live in the room.

What you are hearing is just one of the clever things the brain does to how we hear things. It’s a form of compression, where the quieter things are made louder and the louder things are made quieter, at least to our perception of what is really going on. Some of this also occurs at the cellular level of the hearing mechanism itself, but either way, we get to experience some very clever adjustments to how we perceive sound coming into our ears.

When recording through a microphone, no such comparable amount of compression is happening. That’s why so often you find you can’t find a happy medium when recording, especially listening back through headphones. Singing loud hurts your ears, and singing softly is barely audible… even though in the room it sounded fine.

The challenge here is that we are taking something we normally observe naturally, and translating it into an artificial realm. Our brain isn’t part of that digital recording process, and so can’t even it out to sound more natural sound. Ergo, we need to make some adjustments to the signal/recording itself to compensate for the lack of natural-ness of the recorded sound.

Tone
Similarly, when we listen back to our own voices on recordings, we are often surprised that we don’t sound as deep as we think we do. We also hear certain cadences, pitch changes, tonal qualities or accent characteristics that we feel are invisible when we listen to ourselves speak.

We are the only person in the world to hear ourselves the way we do – from inside our own head. Not only is the brain ‘interfering’ and making adjustments to what we think we hear, but we are getting additional sensory inputs from how our voice vibrates inside our own body. There’s perception of extra bass (hence why you think you sound deeper than the recording sounds). There’s extra top end from vibrations inside your skull. There’s a whole host of parameters that mess with your ability to correctly perceive the tone of your real voice.

As someone who records themselves a lot, there really is no substitute for practice here. It takes time to align your mental perception of how you sound, with the reality of how you sound.

Studios use specific tools for this 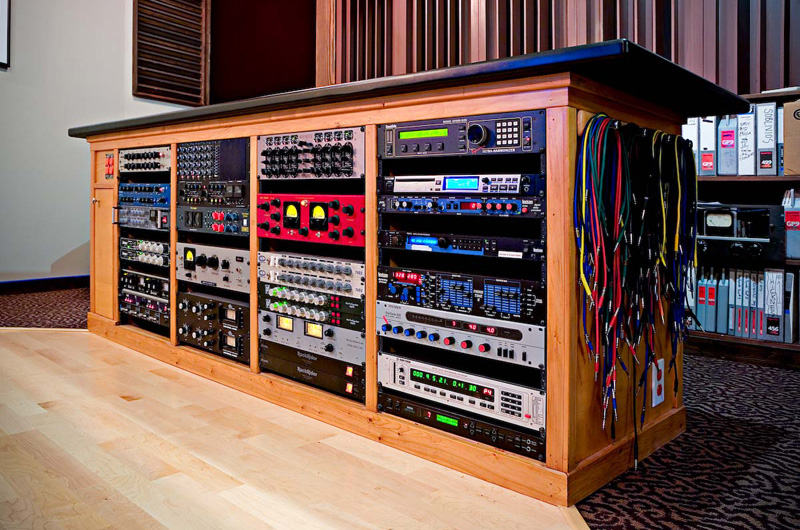 The above image is from a serious studio. All those bits of gear serve specific purposes. Each tool enables people to compensate for the artificiality of the recording process. This is all to make the artificial recording sound more natural when listened to.

Most recording engineers will actually get singers to record through hardware compressors whilst singing, so that what the singer hears through the headphones sounds natural to them. This in turn makes for a better performance from the singer as they are not second guessing volume changes or worried about deafening themselves when being loud on the microphone. This then gets committed to the computer as a more finished recording, and will sound far more natural when listening back.

Preamps and equalisers are yet more bits of hardware that affect the tone of the signal that is run through them. Preamps do a variety of things, but the chief thing that recording engineers use them for is to introduce a particular colour to a singers voice, so as to flatter the sound coming from the microphone. If a singer is very bright, a darker sounding preamp is often used. If a singer is particularly dark sounding, a brighter sounding preamp is often used. Some want a preamp that does very little to the singer’s sound, so as to be as transparent as possible. Please note, these are trends rather than hard and fast rules.

Recording engineers will run microphones into preamps before compression to colour the sound in a way that flatters the singer, with some equalisation (the ability to adjust bass, treble and midrange content of the microphone signal).

Conclusion: Use the right tools for the job

Many home studios can achieve a similar result using software/digital plugins to compress/colour the sound. This will go a long way to improving the quality of your sound. Two final things to note though:
1) It is a skill in itself to make something fundamental artificial, sound natural. It will take time to learn how to make this sound natural, and that’s normal.
2) Plugins have what is called latency, i.e. you cannot hear yourself back perfectly in sync. There will be a small but perceptible delay between singing into the microphone and hearing it back, as processed via the plugins. For this reason, I set up my own hardware-based vocal chain for recording myself and clients. This enables me to dial in a great sound for myself/others, and get a natural and high quality recorded sound very quickly.

Let’s improve your voice together

Get our Vocal Prospectus

We've put together a free 10-page Vocal Prospectus to help you understand exactly how the technique used in our singing lessons works. Just enter your email to have this sent over.